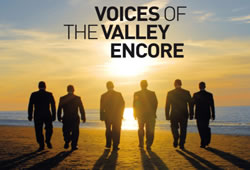 Now in its 68th year, the Fron Choir has had four excellent Conductors since Lloyd. John Daniel, who for 21 years followed in his steps and led the Choir to success in the National Eisteddfod of Wales and the Llangollen International Musical Eisteddfod, as well as an International reputation. Val Jones succeeded John in 1991 and for the next 11 years consolidated that reputation in competition. From 2002 until 2009, Ann Atkinson led the choir during one of its most exciting phases, a major recording contract with Universal Music and four “Voices of the Valley” CD’s and the “Voices of the Valley – Live” DVD.
The “Fron” Choir now has a first class Conductor in the person of Leigh Mason and looks forward to continued progress and success as one of the most distinguished Male Voice Choirs in a nation renowned throughout the World for producing Male Voice Choirs of the highest quality.